Let's look at the cost of traditional vs modern pick-by-light systems in detail.

According to TranSystem's Rules of Thumb for Warehouse and Distribution Centers, a traditional pick-by-light system is broken down as follows:

These are 2010 statistics, but prices typically double every seven years.  At the same time, technology tends to become less expensive over time.  Using these figures, a traditional 100-light system might cost between $110,000 and $150,000, but non-traditional wireless pick-to-light systems cost $10,000 to $12,000.

Typically, pick-by-light systems are purchased along with pallet racks, carousels, conveyor systems and other order fulfillment equipment.  They may also include annual maintenance fees and if you need to relocate devices as your business evolves, that is also an additional expense.

Larger supply chain operations may be using several hundred or even several thousand lights across multiple warehouse, resulting in huge capital expenditures (CAPEX).  Conversely, smaller retailers and materials handling operations may be priced out of the traditional pick-by-light market, making it even harder to stay competitive.

Thankfully, there is another option - modern pick-by-light systems utilize newer technology and more flexible pricing structures that appeal to both large enterprise operations and smaller warehouses. 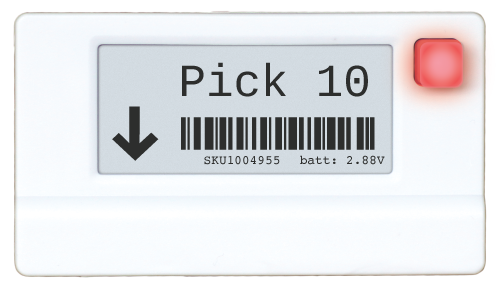 Voodoo Robotics' Cloud Display Devices are often used for order picking and putting (as well as other kitting, quarantine, will-call, and more).  A simple URL causes the associated device to light up with two lines of custom text - in almost any language.  These devices can be used to indicate which inventory should be picked or where the just-picked inventory should be placed.  Devices are wireless and batteries can last for years - depending on the usage.

How much does this new SMART technology cost?

Cloud Display Devices can be leased for $5/month, with no contract.  Lease only the lights you need - scale up during busy seasons and back down when the demand lessens.  If the system doesn't work for you, send it back!

You can even lease a starter kit with 10 devices and 1 Turbo (router) to test the system out in your facility.

By leasing a pick-by-light system, you switch this part of your order fulfillment operation from capital expenditure (CAPEX) to operating expenses (OPEX) while also reducing property tax liability. Companies needing a large number of devices may prefer to purchase rather than lease the devices.

How Many Lights Do I Need?

Because pick-to-light technology can be prohibitively expensive, pick lights are rarely installed throughout the entire warehouse or distribution center.  Instead, lights are installed in the fastest moving lines or for the most frequently picked inventory.

The Pareto principle (also knows as the 80/20 rule), can be helpful in boosting efficiency with light-directed picking.  Typically, 20% of your inventory generates 80% of your income.  Optimizing the order picking for your selling products can create huge boost in efficiency.

Purchasing a traditional light-directed order picking system involves months of research, analysis, negotiations, installation and integration, resulting in greater efficiency.  But, you can get a similar efficiency in a much shorter time-frame at a fraction of the cost.  Lease a starter kit of 10 Cloud Display Devices and one Turbo (router) for $400 to start (activation and first month) then 180 each month.  The system can set-up in minutes, giving you the opportunity to explore the functionality in your warehouse - without the cost, risk or wait-time associated with traditional systems.  You can even use it with Google Sheets or Excel before integrating with your WMS/ERP!

Looking for more information about put-to-light systems?  Check out the 2020 Buyer's Guide to Pick-to-Light to learn about the types of systems, new technology, advantages, costs, and more!

Order Picking Carts: Everything You Need to Know

Let’s have a conversation so we can better understand your needs.  Schedule a demo or contact us and get control of your mispicks!

If the system avoids just a few mispicks, it’s paid for itself!